Our Time in Selma

No Excuses No Regrets 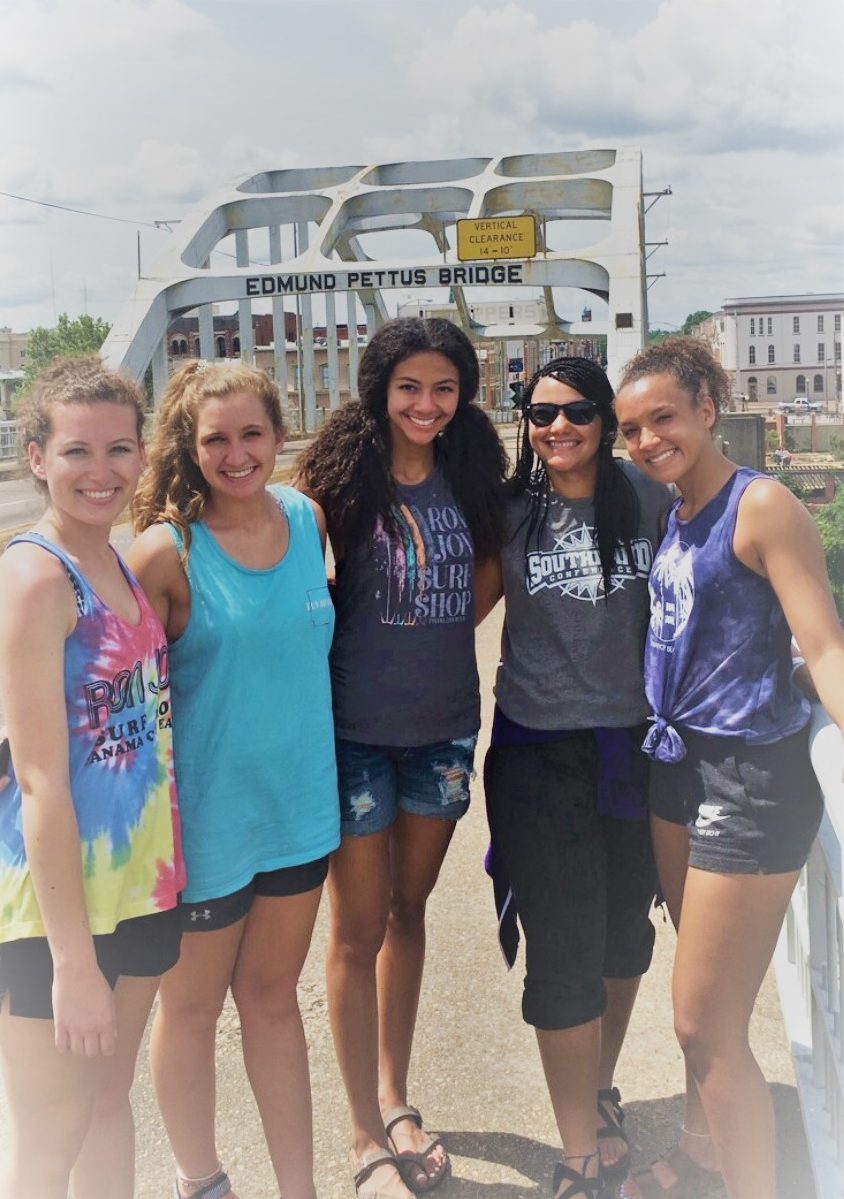 Before I begin, please accept my apology regarding last week’s email send out. Something happened with the site and if you opened an email from the blog on this past Monday, then it did not have a way to click on the link. If you have not read it, then you can go to the blog part of my website (2nd page entitled Missing Peace)  and click on the blog either by title, “Let’s be there for those who are grieving and in pain” or the picture, and you will be connected. However, you can also just feel free to email, text, or message me your request, and I will send the link to you. So sorry about that!! On to Selma…

Last Memorial Day weekend, the girls and I along with three of MiKayla’s dearest friends drove to Florida for some beach time and to celebrate MiKayla’s 18th birthday continuing on our family tradition of an 18th birthday trip. We had a wonderful time together, and I wrote on it in the blog entitled, “18th Birthday trips” dated May 28,2018. This was one of our family traditions that I started with my son PK when he turned 18.

After my husband died in August 2011 from a work related accident and my only son PK was killed in a car accident in June 2013, then traditions and continuing them on for the girls and I has remained a high priority for me. Our trip for MiKayla’s 18th birthday was a wonderful time with the girls and with three of MiKayla’s besties.

We had to leave our beach time a day early due to an incoming tropical storm. On our extra day that we gained from losing a beach day, I decided to drive to Selma, Alabama. I had been wanting to go to Selma and to take the girls there. I wanted myself and my daughters to walk over Edmund Pettus Bridge. I wanted to remind the girls what had happened there and to experience a little part by walking it out in remembrance.

I told all of the girls the story including Olivia, Anna Kate, and Abbie who were there with us. For those of you who are unfamiliar with the story of what happened at Selma in 1965 then let me share just a little bit of what occurred there. The part of the story that I am referring to was during the days of Dr Martin Luther King and the civil rights movement. In Selma and in different locations throughout the south at that time, the people were not allowing African Americans to vote. Dr. King and his Southern Christian Leadership Conference decided to make Selma the place that would be their focus to win voting rights for African Americans in the south. They decided to take action so that all people would have their rights and to be able to exercise them freely.

At that time, the governor of Alabama George Wallace, was vocal in his opposition of the African-American civil rights movement. Additionally, the local authorities in Selma continued to block efforts to register local African Americans to vote.

On March 7th, 500 demonstrators began the 54 mile march to the state capital. They had to cross a bridge, Edmund Pettus Bridge, to leave Selma to make their way to the capital. As the 500 demonstrators crossed the bridge , they were met by state troopers and other men who attacked them with nightsticks, tear gas, and whips after the peaceful demonstrators refused to turn back. Several of the protesters were severely beaten, and others were forced to run for their lives.

Please just stop and picture this scene. The people who were protesting were not doing anything but walking. They were walking across a bridge and were attacked.

They were standing up for their rights… the right to vote and to make decisions about who would govern them and lead them which was their right just the same as any other US citizen. That is all that they were doing, and they were attacked.This horrendous attack was captured on national television and many Americans were outraged by what they saw. Dr. King was in Atlanta, Georgia when this occurred, and he returned to Selma immediately and led another attempt.

On March 9, Dr. King began another march, but he turned the protesters around when the state troopers again blocked them at the end of the bridge. On March 21, the marchers were escorted across Edmund Pettus Bridge by US Army troops and federalized National Guardsmen from Alabama. It is reported that at this time Dr. King led 3200 civil rights demonstrators to the state capital. When they reached Montgomery on March 25, Dr. King addressed live television cameras and a crowd of 25,000. (Selma to Montgomery march begins- History.com Editors).

Looking back at the strength of this group of people that engaged in this march causes me to have such deep admiration for them and their courage. Surely they knew from all of the horror and injustices that had previously occurred, not just in Selma, but across our country that their decision to participate in this march put them at risk. I often wonder how many felt afraid yet forged ahead and got out of their comfort zones and walked in spite of their fears.

After the vicious attack on that Bloody Sunday, did that stop them? Absolutely not. Just two days later after the severe beatings had occurred, they got back up and did it again. I wonder again, “What would have I done?” I hope again that I would have been a woman of courage and would have stood for what was right. I hope that I will always stand for equal rights for all people that have been created by God and are all so deeply loved by God.

I had decided that some day that I wanted to walk across that bridge and remember what had happened with my girls. I was determined to get there someday with my girls. I wanted them to understand this part of their heritage and to learn from the courage and perseverance of others. I want my two girls and I to model our lives after real life heroes like Dr. King who built his life on standing firm in working for all people to have their rights protected and to demonstrate the love of God to all.

When we left for our beach trip, I had no idea that my girls and I would be walking that bridge at Selma at the end of our trip, but I am sure glad that we did.

That day as we parked and began walking across that bridge, my mind and heart again returned to the example of those who have gone before us. The people who walked this bridge in the midst of such adversity displayed such courage. I want myself and my girls to be women of that kind of strength and character. I want us to value each person who is created by God and for all to be treated with love and respect by us. I wanted all of us to learn from the strength and dignity of those who had gone before us. I wanted us also to keep that perseverance that they so strongly displayed rooted deeply within us in each battle that we were fighting in our individual lives and in our mission of helping others. May we have true perseverance in all that matters.

My mind was flooded with images that I had read about or watched on the movie Selma as we walked across that bridge. I thought of the people being attacked and beaten just as they walked. My eyes were filled with tears as we walked and reflected. I was amazed at the people driving by us who would all honk and wave. I heard one lady cry out, “Thanks for remembering.”

Thanks for remembering. What impactful words to my heart. At that moment the tears poured. How often do we stop and remember the courage and the strength of those who have gone before us? How often do we honor those who have made a way for us by living in strength and honor? I wanted my girls and I to remember. Oh how thankful my heart was as I walked across that bridge and reflected on the strength, dignity, and perseverance of each one who marched on those dates in 1965.

When we got off of the bridge then the girls wanted to walk on the trails under it and go to the river. We wandered around and explored the area. I played the song from the movie Selma, “Glory”:

I was so thankful to have this opportunity with my two daughters, with my niece Abbie, and with Olivia and Anna Kate who feel like part mine as well. It is so important in this life that we stop and remember those who have gone before us and to truly learn from them. So often we are so “busy” that we don’t take the time to stop, reflect, and learn from others. I have been guilty of this as well. As I continue to grow and heal then I truly want to learn from those who have gone before me. I want to model this courage, strength, and dignity in my own life. Some of my favorite quotes from Dr. King are as follows:

“Life’s most persistent and urgent question is, ‘What are you doing for others?'”

“Faith is taking the first step even when you don’t see the whole staircase.”

“We must accept finite disappointment, but never lose infinite hope.”

“I have decided to stick with love. Hate is too great a burden to bear.”

Those quotes from Dr. King are just a few of my favorites. I have so many as his words were so inspiring and motivating whenever he spoke. May we all live as these words encourage. May we live in love. May we live in faith. May we never lose infinite hope. May we stand in times of challenge and controversy. May we use love to keep us in the light and to drive out darkness and hate. May we not just ask, What are we doing for others, but may we always live in service of others. Thank you to all of the incredible men and women who have gone before us. May we continue to learn from and live in their courage, strength, and perseverance.

Rugby Girls Basketball and Samson with My Wonderful Parents
February 23, 2019

Let’s Be There for Those Who Are Grieving and in Pain
February 23, 2019